A Darker Shade of Black 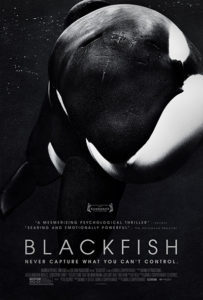 SeaWorld is in a world of hurt.

The marine attraction is weathering a storm brought on by “Blackfish,” a documentary exposing its practice of capturing killer whales in the wild, separating them from their families and holding them in captivity–which, for animals accustomed to oceanwide habitats, amounts to a life sentence in a concrete bathtub.

The backlash from the film has seen SeaWorld’s stocks dropping precipitously, scientists raining condemnation upon them, scheduled musicians cancelling their concerts, and hometown teenagers throwing away their Shamu toys in disgust.

The outrage has been so pervasive that Psychology Today compares the “Blackfish Effect” to “a moral uprising akin to the one that eventually overthrew apartheid.”

“Blackfish” exposes practices that a broad swath of society finds morally repugnant and taps into a deep and largely repressed anxiety over the planet’s troubled future. No surprise it has hit a nerve.

But I have to wonder whether “Blackfish” would have been as successful had it been released under any other name.

Most people know these animals as “killer whales” or “orcas.” For most Americans, these words have been in our vocabulary since childhood–they are familiar and comfortable. Even “killer” in “killer whale” no longer compels–not when we equate killer whales with “Free Willy.” If the film had been named “Orca” or “Killer Whale,” I would have assumed it’s another nature documentary à la National Geographic. No offense to NatGeo, but … yawn.

“Blackfish” stopped me. It’s an alternative but little used name for the whale that’s dark, mysterious, strange and powerful. With the tagline, “Never capture what you can’t control,” it’s a one-two punch.

Ironically, SeaWorld has had a hand in diluting the power of the animal’s more common names. “Orca” and “killer whale” now conjure images of large marine mammals performing tricks for crowds.

To their credit, “Blackfish’s” producer and marketing team avoided these instant, cuddly, SeaWorld-shaded perceptions by naming the film with an uncommon, jarring word.

It remains to be seen if SeaWorld can survive this storm–or if it will have to find another use for all those concrete bathtubs.