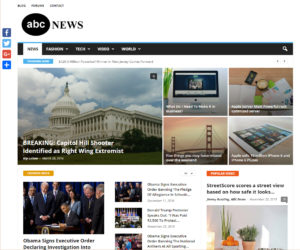 If you’re among the 44% of the American public who get their news from Facebook, you’ve seen fake news. Often hyper-partisan, the headlines are deliberately crafted to enrage:

Amplifying the problem are legitimate news sites that are duped into repeating the stories. The Columbia Journalism Review published this cautionary tale:

IT WOULD’VE BEEN one hell of a story. Early this month, “news” surfaced that Michael Jordan–yes, the Michael Jordan–had threatened to move his NBA team, the Charlotte Hornets, from North Carolina unless the state repealed a law barring transgender people from using the bathroom of their choice. Air Jordan hadn’t seemed so heroic since he saved Bugs Bunny in the 1996 movie Space Jam.

Except the news was as fictional as the film.

A few sites posing as legitimate news organizations, including one that crudely imitates ABC News’ logo and web address, first published the bunk Jordan story. From there it spread to other media outlets, like Metro US, Elite Daily, and the Dallas Voice. The Milwaukee Journal Sentinel even weaponized the false claim in an editorial against North Carolina’s law. For what felt like the millionth time, fake news sites–the kind that say they’re satirical but are nothing like The Onion–had duped journalists into buying a bogus story.

Key to these journalists’ confusion was the domain name of the originating site: abcnews.com.co. The site is deliberately formatted to resemble the real ABC News site at abcnews.com.

And there are more: NBC.com.co, ABCNewsGo.co, usatoday.com.co, washingtonpost.com.co, and a host of others. (Although, they could disappear at any time after legitimate trademark holders register their complaints.)

Lifewire provides this advice for its readers:

Sometimes it’s real easy to spot a fake news site just by looking at its domain name, or its URL. For example, ABCNews.com.co is a pretty well-known fake news site that aims to trick readers into thinking it’s the real ABCNews.go.com. The secret lies in looking for extra sketchy looking words that may accompany brand names and whether the site ends in something most reputable sites don’t use. In this example, the .co at the end of the URL. (emphasis added)

In a post about trademark complaints due to doppelganger websites, FindLaw piles on with:

Is It .co for Colombia, or for Con? … Since .co is so easily confused with .com, it’s often the choice of cybersquatters and fraudsters…

And so goes the hapless .co domain extension

Originally created as the country code top-level domain (ccTLD) assigned to Columbia, restrictions were removed in 2010, so anyone could use it in their domain name. It was a short, useful, available and cheap alternative to .com. Because “co” is a common abbreviation for “company,” many entrepreneurs were able to snatch up a domain name that was maybe kinda almost-as-good as a domain name with a .com extension. As of the date of this post, there are 2.2 million domains ending in .co. It’s the 27th most common domain extension—only slightly behind .us but more popular than .biz.

But has fake news now tainted the .co domain extension? Will it be forever associated with “something most reputable sites don’t use” and “the choice of fraudsters?”

The question has certainly given us pause at Pollywog. We believe it’s still preferable to have a .com or .net domain name, even if you can’t secure the pure “brandname.com” version of it. But there have been instances in which a shorter, purer domain name works better for the business, and we didn’t shy away from recommending .co options.

But maybe we should now. It’ll be interesting to see where the fake news phenomenon goes from here. And whether it takes the .co domain extension down into the muck with it.