Ever since I adopted my first dog a few years ago, I’ve been an avid supporter and volunteer for the local Golden Retriever rescue organization, Retrieve a Golden of Minnesota (RAGOM). And whenever RAGOM needs help with branding, I gladly raise my hand.

A few years ago, Pollywog branded RAGOM’s annual fundraiser, Goldzilla. It has since grown into what may be the largest Golden Retriever event in the nation–the self-fulfilling prophecy behind its audacious name.

Recently, RAGOM asked us to brand another smaller fundraiser, a craft beer tasting and silent auction at Summit Brewery, with proceeds benefiting Golden Retriever rescue. For this project, I teamed up with freelance graphic designer Jennifer O’Brien, also a RAGOM volunteer, and together we created Stouts for Snouts. 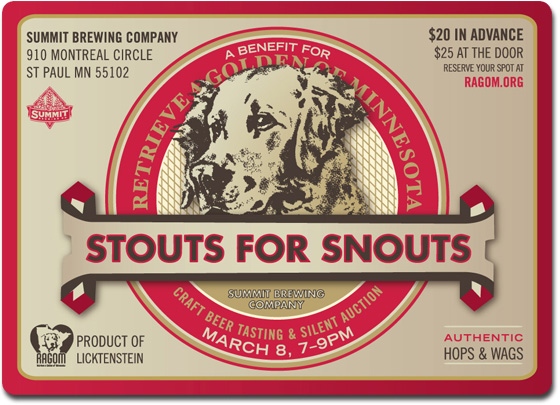 When RAGOM introduced the brand and began promoting the event in social media, there was an immediate demand for tee shirts. Between tee shirt sales, the silent auction and admission fees, Stouts for Snouts raised almost $5,000 for needy Golden Retrievers in Minnesota.

With Stouts for Snouts, I was once again fortunate to work in that gratifying place where professional skills are committed to a personal cause.

Why yes, I do have a photo of my dogs. Thanks for asking! Chaz (left) is a purebred Golden Retriever I adopted from the Animal Humane Society. And Pippin, who was rescued by RAGOM, doesn’t have a drop of Golden in him. He’s a mix of Dachshund/Chow/Shar-Pei/Rat Terrier and many other breeds–a survivor of a hoarding situation, who had the good fortune of looking like a “mini-Golden.” 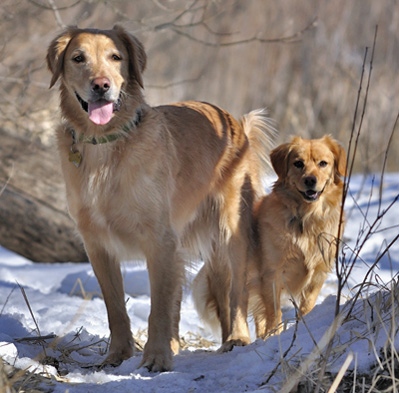