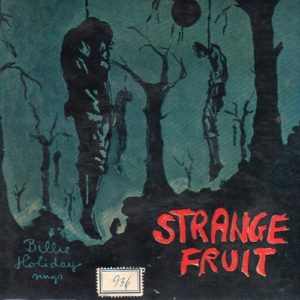 Racist brands have littered our marketplace for decades. Some, like Aunt Jemima and Uncle Ben’s, have made modest attempts to appear less offensive, while others (I’m looking at you, Washington Redskins) staunchly defend their brands against mounting criticism.

But it takes a special kind of tone-deafness to introduce a racist brand name today and serve it up for its inevitable beating in social media. A hapless PR agency in Austin, Texas, thought nobody would notice or care when it named itself “Strange Fruit.” The Twitterverse showed them just how wrong they were.

“Strange Fruit” was a famous Billie Holiday song recorded in 1939 about lynchings in the Jim Crow South.

Southern trees bear a strange fruit,
Blood on the leaves and blood at the root,
Black body swinging in the Southern breeze,
Strange fruit hanging from the poplar trees.

The meaning behind “Strange Fruit” is horrendous, and the PR firm wildly underestimated the public’s memory and tolerance for racial allusions. “We thought the term ‘strange fruit’ really could stand for someone who stood out in a crowd,” they Tweeted in semi-apology, “a talent that was different and remarkable.”

At Pollywog, we’re not a big believer in audience testing of potential brand names. It’s our opinion that audience testing is useful only as a disaster check. Are there widely held meanings in these names that we are not seeing?

The Austin’s PR company’s audience is other business professionals. Normally, we would not expect a significant cultural disparity between the PR principals and their potential clients when it comes to how names are perceived.

But once race is introduced in a name, all bets are off. Suddenly, it’s not just about how potential customers perceive the name–now it matters to the public as a whole.

So, here’s a tip. If you’re considering a brand name that could have racial connotations, test it and see. (And by “test it,” I mean hire a researcher and use proper methodology–don’t just run it past people in the hallway.)

Or better yet, find another name.

Because even if you don’t see the racism in a name, others can and will, as the makers of Slanties Eyewear discovered.

The Austin PR agency has since announced a name change to Perennial Public Relations. What a shame that they went from shockingly offensive to completely bland. On the other hand, maybe being unnoticed and easily forgotten is their best PR strategy right now.