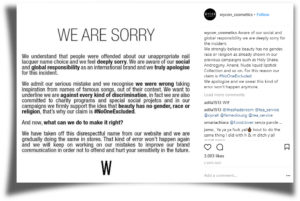 After the firestorm last year following the release of beauty products with offensive brand names, you might think cosmetics makers would reel it in a tad.

Instead, Wycon Cosmetics doubled-down by releasing nail polish with a name so repugnant, it has to be masked out in headlines.

This is a name that decent creative people would be embarrassed to utter even in the safe environment of a brainstorming session. How did it make it all the way onto a package and into stores?

Digging into the background of this branding debacle, we learn that Italy-based Wycon had made a practice of deriving product names from song lyrics. Instead of going through the effort of honest ideation, they just dipped into the creative work of hip hop artists and stole their words, labeling their products with names such as:

The company initially responded to complaints with this tepid statement: “They’re made-up names that are a bit crazy.”

But, see, that’s the problem. Wycon didn’t make up the name. These words aren’t theirs, and they don’t understand the culture they sprang from. Taken out of context and slapped onto a product, they lose their intended meaning. They become a slur said by outsiders, rather than an expression of camaraderie between people with a shared experience.

Now, I’m no fan of name testing. More often than not, audience testing eliminates good names because they’re not perfect. Testing asks people to seek out flaws that would be barely a blip if they were introduced to the brand in a natural setting. Testing is usually the kiss of death for names that have any negative connotations—even when those negative connotations actually help a brand be noticed and remembered.

Audience testing should be used only as a disaster check—to prevent the kind of debacle that can happen when creatives and decision-makers are too far removed from the target audience.

Wycon could have saved themselves a lot of grief if they’d run these names past a few black people. Or better yet, if they’d had a more diverse creative team that actually, you know, created names instead of pilfering phrases from a culture they didn’t understand.