The Dogs of War

There was a time when publicly attacking the The Humane Society of the United States (HSUS) would have been like attacking Mother Teresa. How could anybody be against helping animals?

But social movements are like physics. For every action, there is an equal and opposite reaction. You don’t meddle in other people’s business—working to end inhumane slaughter methods, alleviate suffering among laboratory animals and stop the practice of supplying research labs with dogs from animal shelters, as The HSUS accomplished shortly after its founding in 1954—without raising the dander of some powerful interests.

Certainly even in those early years, The HSUS had enemies—research labs, scientists, foundations, agricultural interests. But they weren’t sophisticated communicators, nor particularly well-funded. They didn’t know how to fight back without turning the public against them. After all, it’s not nice to pick on charities just trying to trying to make the world a better place for All God’s Creatures.

But that was then. This is now: 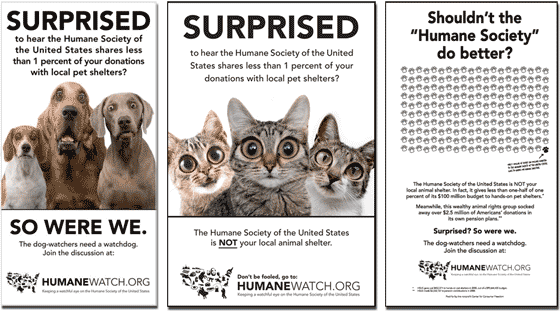 Now, industries whose profits are threatened by animal welfare legislation have found a way to fight back: Fund a “charity” that purports to be concerned for animals.

The Wolf in Sheep’s Clothing

HumaneWatch is a registered nonprofit organization whose mission is to “keep a watchful eye on The Humane Society of the United States.” But follow the money. According to the copyright line in the Web site’s footer, the content is owned by the Center for Consumer Freedom (CCF), a nonprofit lobbying group founded by Richard Berman, a D.C. lobbyist notorious for attempting to knock the halo off charities genuinely working for the betterment of society, such as Mothers Against Drunk Driving. Through CCF, he has defended the tobacco industry, minimized the dangers of mad cow disease and mercury in fish, fought against minimum wage, demonized unions—in short, he has been doing the bidding of corporations even when it’s against health, safety, economic and environmental public interests.

Though its funding sources are a closely guarded secret, CCF’s agenda supports Big Pharma, Big Ag, Big Tobacco, and the food and restaurant industries—all of which would have reason to counterattack The HSUS for its efforts on behalf of research and farm animals. Given Berman’s lobbying experience and communications savvy, it’s almost certain that CCF conducted focus groups to ascertain weaknesses in HSUS’s image among its supporters and uncovered significant confusion regarding The HSUS’s role and relationship to local shelters.

The (likely) key finding: Many people erroneously believe that local humane societies are affiliates of The Humane Society of the United States.

How a Branding Issue Became a Weapon

The strategists at CCF are smart. They know that it’s almost impossible to change strongly held perceptions and values. So instead of directly attacking The HSUS and trying to build sympathy for corporations over animals, you exploit an existing value to your clients’ advantage. You leverage people’s love for animals, take advantage of the brand confusion surrounding HSUS and tell people that The HSUS doesn’t support local shelters. Never mind that it was never The HSUS’s mission. If people have been confused, they’ll be angry that their donations are not going to where they mistakenly thought they were.

It has been an effective strategy, save for one flaw. HumaneWatch has been directly linked to CCF, making it a little too simple to follow the money, uncover the motivation behind the attacks and deduce its goal of diverting donations away from The HSUS. (Local shelters are no threat to big corporations, after all, so in one deft, disingenuous message, HumaneWatch can defund The HSUS and look like a hero to animal lovers.) But genuine watchdog groups, such as HumaneWatch.info (known on Facebook as Stop HumaneWatch), have been exposing the lies and distortions. Gradually, people are getting wise to HumaneWatch and its corporate-friendly, deceptive agenda.

A slight adjustment in tactics was required. 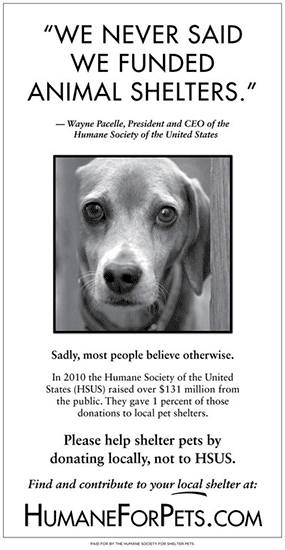 The Humane Society for Shelter Pets (HSSP) exploded onto the animal welfare scene in late 2011 with a multi-million-dollar ad blitz in newspapers nationwide.

A registered 501(c)(3) nonprofit organization, the HSSP’s publicly stated mission is “to help animals at local pet shelters.” HSSP’s agenda and communications strategy and tactics are identical to HumaneWatch’s, leading animal welfare advocates to immediately question its origins and motives. What nonprofit organization is founded one month, then spends millions of dollars in advertising the next?

After some digging, bloggers discovered that HSSP shares the same street address as CCF. When asked directly about the relationship, an HSSP spokesman said:

The speciousness of this answer, of course, lies in the fact that tax status is simply a matter of paperwork. Two organizations can be considered separate entities and still be steered by the same individuals and strategies.

The OhMiDog blog ferreted out the truth and got this quote directly from Berman*:

I’m proud to say that my firm, Berman and Company, helped get this excellent group off the ground by providing substantial pro bono PR and operational services.

In response, HSUS posted this FAQ about Berman and the HSSP. In addition to voicing indignation over the distortions and manipulations inherent in Berman’s attacks, HSUS wrote this:

In hijacking the proud name “Humane Society” from groups at the local and national level—groups that have worked honorably to help animals for decades—Berman cynically sought to fool people into thinking that he had the interests of pets in mind, when indeed the real point of the group was to attack The Humane Society of the United States. …  If pickpocketing the name “Humane Society” wasn’t shameful enough, Berman and his undisclosed backers lifted the words “Shelter Pets” straight from the established “Shelter Pet Project” of The HSUS, The Ad Council and Maddie’s Fund.

Welcome to the Department of Redundancy Department

Confused yet? There are hundreds more organizations in the nation with “humane society” in their name. While unintentional, naming a national organization the “The Humane Society of the United States”—when there were already similarly named local groups—has created profound brand confusion.

What If It’s Not All Bad?

I know of no scientific published studies confirming that people have been mistakenly donating to The HSUS, thinking the funds were going directly to local shelters. But from a branding perspective, I can imagine that it happens. So while The HSUS has not actively cultivated this perception and has overtly tried to educate the public as to its relationship with local shelters, conflation is almost inevitable due to the similarity of their names.

Only The HSUS can know how much revenue comes from confused donors. Some, certainly. Most? Doubtful. How much is too much? Is the confusion HSUS’s fault? Is it their responsibility to clear up?

Before HumaneWatch and HSSP, it’s likely that any brand confusion between The HSUS and local shelters was to The HSUS’s benefit. Now it’s become a liability. From a branding perspective, The HSUS has these options:

1. Retain its venerable though problematic brand name and continue attempts at educating the public. This appears to be the current course of action. The HSUS has called Berman “a small-fry sideshow act that operates on the periphery of American life,” and believes it’s doubtful that Berman’s attacks will have any impact on animal welfare.

Pros:
• Prevents the costs and disruption of rebranding, not to mention a potentially significant drop-off in donations
• Avoids giving the opposition added publicity that would follow a more significant response

Cons:
• May not be enough to overcome negative perceptions spreading virally among animal lovers; the “sideshow” may become more of a “main event” if HSSP throws more money into negative ads.

2. Rebrand.  View this situation as an opportunity to develop a new name that will distinguish the organization from all others in the nation.

Pros:
• Removes a weapon from the opposition and would potentially force a rebranding of HumaneWatch
• Enables the organization to communicate its position as a national leader with a name that cannot be confused with local shelters, and allows it to rise or fall on its own merits

Cons:
• Costly; costs of rebranding must be weighed against damages from continuing confusion
• May result in significant loss of donations if previous brand confusion was indeed responsible for a large share of revenue

3. Fight back.  The name “The Humane Society of the United States” is a registered trademark. The HSUS could mount a case for brand confusion with “Humane Society for Shelter Pets,” which does not appear to have been registered with the USPTO. They should also sue HumaneWatch for trademark violation with regards to its logo.

Pros:
• Helps safeguard The HSUS’s good name
• Pursuing trademark infringement cases is often considered necessary in order to continue to own the mark
• Puts the spotlight on HumaneWatch and HSSP as entities with dubious motives

Cons:
• Diverts funds from mission
• Costly, unless The HSUS can find a firm to provide pro bono services

If this were a case of brand confusion among for-profit companies, the solution would be much simpler. Rebrand. Bite the bullet, spend the money and create an ownable brand. Spend more in marketing the first year to make up for a potential short-term loss of customers. With a strong brand, you’ll get them all back and more.

But donations muddy the waters here. A nonprofit organization doesn’t as easily rebound from a sharp decrease in revenue. Because its mission mandates responsible spending, it can’t sink a huge bulk of its budget into fundraising campaigns to rebuild a donor base—not without blistering criticism, anyway.

I don’t see any clear path, but then again, I’m viewing this from an outsider’s perspective. Perhaps the answers lie in The HSUS’s financials and donor surveys. Perhaps the answers will be more clear in a year, especially if the wolves in sheep’s clothing manage to steal enough of the flock to make a real difference. It will be interesting—and painful—to watch.

*This post on the OhMiDog blog has been removed, begging the question whether the author was pressured to scrub the quote.

The Humane Society for Shelter Pets (HSSP) has filed for dissolution, but not before funneling more than $765,000 in “donations” into his personal and company bank accounts, according to the watchdog group, Stop Humane Watch.